The Novel Coronavirus (COVID-19) is having an immense impact in our communities.
Our primary concern is for the safety of our team members and customers.
Currently, we are operating as normal except for in-person training (tentatively suspended until June).
We continue to monitor the situation at all of our locations and will provide updates as necessary. 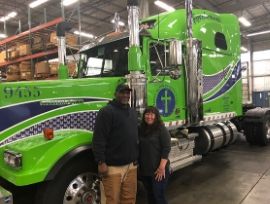 When you’ve spent almost 30 years crisscrossing the United States and Canada in a truck like Toby Jenkins has you notice a few things. For instance, the Western Star badge. To Toby, that means one thing – quality.

He’s been an admirer of the brand for years. So, when he started his own trucking company, Joint Heirs Logistics, in 2016 he dangled a carrot in front of himself. He might one day get to own a Western Star truck. That day arrived in early November when he and his wife Diane pulled into the Western Star plant in Portland, Oregon, to take delivery of their Western Star 4900 EX.

Toby worked with our Truck Sales team in Alaska, where his company is based, to customize the build of his Western Star truck.

“What a joy that was piecing this truck up from the ground,” said Toby. 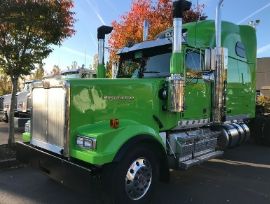 A Detroit Diesel DD16 15.6-liter engine forms the foundation of Toby’s extended hood truck. The 6-cylinder engine provides up to 600 hp and 2050lb-ft of torque.

The cab features an 82-inch stratosphere sleeper, dinette and television that gives the space the feel of a small apartment.

The wheelbase is extended to 300 inches and includes a full set off axle lockers. A specialized electronic shipment management system was also added to the truck.

The truck’s cab is finished in a neon green paint and wrap of the Seattle Seahawks logo. The homage to the NFL team is a tribute to Diane’s brother, who died in 2018 after battling colon cancer. The siblings shared a love of the team.

The Western Star is the third truck in the Joint Heirs Logistic fleet and is now the flagship hauler that will be driven by Toby and Diane. Each of the trucks hauls pneumatic tanks that ship specialized resins and pellets for customers that contract with Toby’s trucking broker in North Littlerock, Arkansas.

Toby said his company has been blessed with the ability to add a new truck each year it has been in business.

Toby and Diane didn’t waste time admiring the truck. They made their first haul a little more than a week after taking delivery of their Western Star. Given the longevity of the Western Stars he’s seen on the road, Toby expects their truck to have a long career. He’s also got plans for it once he and Diane retire.

“We’re going to strap the longest fifth wheel camper on that when we finish trucking,” he said.