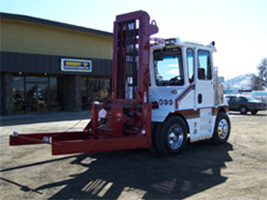 As a trusted manufacturer from Klamath Falls, Ore., Sunny D Manufacturing has been revolutionizing the agricultural machinery industry since 1968. Specializing in manufacturing Hay Squeezes for farming applications, Sunny D’s equipment take on farming challenges that require some of the most reliable machinery in the field. So reliable in fact, that the first model that Sunny D manufactured in ’68 can still be found baling hay today.

Operating in one of the most demanding industries in America requires a transmission that can not only support, but drive the performance of Hay Squeeze machines. Sunny D relies on Pacific Power Group to provide Allison MD3000 Rugged Duty Service automatic transmissions to operate the dual controls in each hay bailer. Outfitted similarly to a heavy-duty forklift, Sunny D’s Hay Squeezes are used for handling large square and round bales of Alfalfa hay, one of the most heavily sought after crops in the U.S.

The Allison MD3000RDS transmissions used in Sunny D’s Hay Squeezes are renowned for their near bullet-proof builds, performance and adaptability to dual controls for steering, shifting, throttle and braking. These advantages are essential for getting the job done in uncooperative agricultural environments. For the critical combination of power, performance, and reliability, Sunny D chooses Pacific Power Group’s engineering and support team to supply the transmissions that make baling, preparing and collecting some of the nation’s most important crops a breeze.