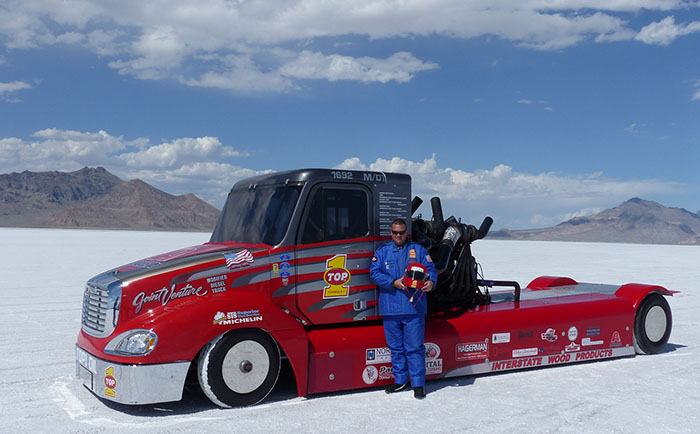 Start your engines! Each year at Speed Week in the Bonneville Salt Flats in Utah, the fastest vehicles in the world compete to see who the fastest truck on the salt is. Famous around the world, the salt flats are one the best places to race fast cars and set international speed records.

This year, Pacific Power Group assisted in providing a new engine for a veteran racing rig known as the “World’s Fastest Freightliner” – a fan favorite at the races. After 20 years operating with the previous engine, the race team decided to push their truck to go even faster with by repowering with an MTU engine.

Now, with an MTU 16V2000 engine supplied by PPG, the truck will have more torque and horsepower which means more speed than ever before. That’s impressive considering the truck already reaches speeds of 230 mph.

Having set a number of speed records over its long career, the rig’s new engine will be key for powering it to record breaking speeds once again. The MTU 16V2000 engine features larger pumps and new calibrations, nozzles and turbo that make the engine operate at approximately 3200 rpm – meaning serious speed across the race track.

Traveling at such speeds requires a truly daring driver. Mark Zweig, a jet pilot for the Air Force, will be behind the wheel of this super-powered rig, pushing it and its new MTU engine to reach maximum speed.

With the engine provided by Pacific Power Group, the truck will reach speeds as high as 250 mph on the salt flats – hopefully leaving the competition in the dust!