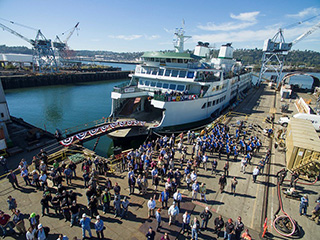 If you take a ride on a new Washington State Ferry, it’s likely your vessel’s onboard power is provided by three Volvo Penta generators from Pacific Power Group. Volvo Penta diesel generators have been selected to power two new ferries for the Washington State fleet, including the Chimacum, which was recently delivered, and the Suquamish, currently under construction.

Transporting nearly 24 million visitors and residents between 20 different ports each year, the Washington State Ferry (WSF) fleet is trusted as the primary water transport for the Puget Sound
area – from Port Defiance all the way to Vancouver Island in Canada. Seven of 22 current vessels are between 40 and 60 years old and are approaching the end of their service lives. The new Washington State vessels are the Olympic class 144-car ferries, two of which are already in service. Vigor Industrial was contracted to build the new ferries, with PPG providing the crucial onboard power.

The Chimacum will be replacing an older vessel on the Seattle/Bremerton route in late spring 2017. The Suquamish is slated to arrive to WSF in Fall 2018. Two additional ferries built by Vigor have already joined the WSF fleet: the Tokitae joined the Mukilteo/Clinton route in 2014, and the Samish was put into service on the Anacortes/San Juan Islands route in June 2015. 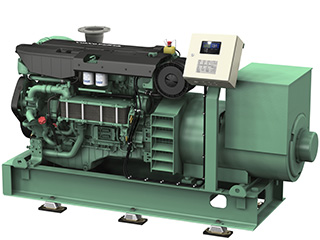 Reducing emissions is a critical focus for WSF. The new Volvo Penta generators are EPA Tier 3-certified and will have cleaner operations than previous power sources, helping to reduce impact on Washington’s waterways and air.

More about the WSF Project