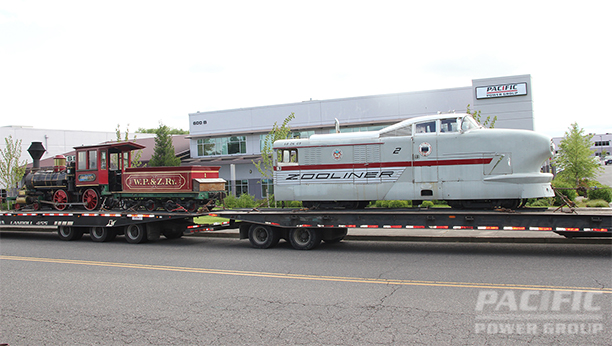 Pacific Power Group moved the Oregon Zoo’s Zooliner train engine and Centennial steam locomotive to its facility in Ridgefield earlier this week in preparation for restoration and upgrades.

The PPG industrial engine team will remove the current engine and replace it with a Perkins Tier 4i engine, with advanced emission controls technology designed to reduce exhaust emissions. In addition, Pacific Power Group’s body shop technicians will perform some cosmetic work, including sanding and repainting, on both the Centennial and the Zooliner. PPG’s engine experts will also test the Centennial steam locomotive’s pressure vessel, install a new smoke box, and replace the steel-frame carriage on the locomotive’s tender car.

“The employees are excited to be a part of this project,” said Andy Machin, VP of Industrial Engines at Pacific Power Group. “Pacific is proud to be the single-source solution provider, with the advanced clean diesel technology and safety enhancements to help extend the useful life of these historic locomotives. Several of our divisions will be collaborating on the project, including our engine application engineering and design group, and our body and paint division.”