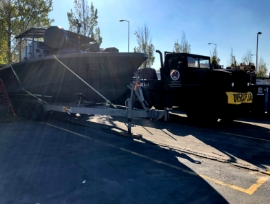 Dave Miller Sr. was one of our most respected and experienced technicians who built a reputation as a teacher who mentored our newer techs. What many of us didn’t fully understand until Dave’s passing in 2017 was the depth of his generosity.

We got a better understanding of Dave’s philanthropy this past summer when the Northwest Chapter of the Gamewardens Association contacted Dan Miller, Dave’s son and our service manager in Kent, Washington. Dave, who everyone knew as Diesel Dog, for years had volunteered with the the Gamewardens to keep its 32-foot MKII PBR, a river patrol boat used in Vietnam, running.

The group was calling because they hadn’t heard from Dave in a while. They didn’t now Dave had passed.

The Gamewardens are Vietnam combat veterans who served on the Brown Water Navy, the name given to the units that patrolled rivers. The MKII PBR, or river boat, was the preferred craft the unit used. The veterans often display the PBR at parades around Washington and use it to escort U.S. Navy ships.

Once they learned why they hadn’t seen Dave, the group wanted to honor his work for them with a Navy burial at sea. Dan and his wife 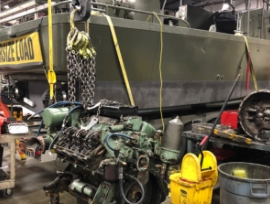 were invited and arrived at Commencement Bay in Tacoma, Washington, to witness the ceremony.

But when the boat was fired up, Dan noticed a distinct smell coming from the engine that indicated there was a mechanical problem.

“I told them you’ve got a bent valve,” he said. “They just thought it was running a bit rough.”

Without Dave to keep up the boat’s maintenance, it had suffered. Dan told the group not to worry. Bring it to our shop in Kent and I’ll have our techs take a look at it, he said.

Tom McMullen, one of our technicians, got very excited when he saw the boat and was the first to volunteer and take up Dave’s mantle. McMullen is a Vietnam vet who was a mechanic on the river boats during the war. In the shop, he’s known as Mad Dog.

Mad Dog and others who are volunteering to work on the boat discovered the problems went beyond just a bent valve. They’ve pulled out the port engine and are rebuilding the power source. Next year they’ll work on the other engine.

Word spread about our work on the Gamwardens’ PBR. A chapter in Muskegon, Michigan, called Dan asking for help. He donated six injectors for their boat. Pacific Power Group has been added to the group’s donor board and is invited to participate in a national reunion in 2020.

The enthusiasm of the Kent techs to support the Gamewardens exemplifies the company’s core value of Stewardship and is another example of how each of our offices embrace the communities in which we work and find ways to help others.

In a way, this is another opportunity to continue Dave’s legacy of teaching others. Pacific Power Group established a scholarship in Dave’s name to assist young techs with tuition.

Dan said when he joined the company 23 years ago, 25 people knew how to work on the PBR engines. Now it’s three. By bringing the Gamwardens’ PBR to our shop, we’ve got an opportunity to grow the number of people who can keep the PBR running and to remember what the boat represents.