The Novel Coronavirus (COVID-19) is having an immense impact on our communities.
Our primary concern is for the safety of our team members and customers.
Currently, we are operating as normal and will continue to monitor the situation at all of our locations and will provide updates as necessary. 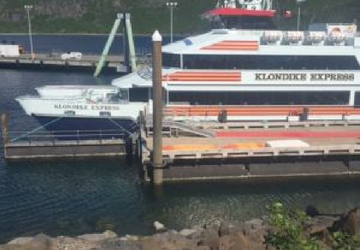 A dedicated team of techs from Pacific Power Group’s Anchorage office were deep into preseason engine maintenance on one of two day-cruise vessels Phillips Cruises & Tours operates out of Whittier, Alaska, when the M/V Klondike Express returned to port with a faulty injector.

“We were about to start off our season on a very sour note and our reputation with our customers and vendors was at stake,” said Gary Sommerfeld, marine operations manager for Phillips Cruises.

Since the 1950s, Phillips Cruises has plied the waters of Alaska giving visitors intimate views of Prince William Sound, Esther Passage and the glaciers and wildlife that inhabit this remote location. PPG has been a longtime partner with Phillips to keep its catamarans running at peak performance. The PPG team is working with Phillips on a repower project, swapping out the engines on the M/V Bravest with two new MTU 16v4000M64 EPA Tier 3 2680 HP engines. The Bravest will join the other two catamarans in the spring of 2019.

The dedication and effort of the techs saved Phillips Cruises thousands of dollars in potentially lost business. Sommerfeld was so impressed with the effort and the work he reached out to Bill Mossey, president of Pacific Power Group, to make sure he knew how important the hustle was to his company.

“I want to thank everybody at PPG,” Sommerfeld said. “Your efforts went above and beyond the norm this weekend.”

Mossey echoed Sommerfeld’s comments adding that the team’s ability to quickly switch gears and tackle the Klondike’s problem once again demonstrates why PPG is so trusted by its customers.