As a kid growing up in Alaska, Raymond Nix fell in love with the delta style aluminum-hulled, fishing boats he saw plying the waters near his home. The admiration only grew stronger when he became a charter operator.

Nix’s dream is coming true with the arrival of F/V Strait Crazy, a 37-foot-long aluminum beauty built by ACI Boats of Port Townsend, Washington. The vessel features a raised pilot house and room to sleep eight. It’s also a game changer for Nix’s charter business, Crazy Ray’s Adventures. It gives him a third vessel for fishing groups up to 12 and allows him to extend the season beyond fishing to cater to hunting parties.

We worked with Nix in finding the right propulsion package to power the Strait Crazy. Nix ultimately decided to go with a pair of Volvo Penta D6-330A engines and DPH sterndrives.

“The newly designed drives sealed the deal for me,” Nix said.

Crazy Ray’s Adventures operates out of Whittier, Alaska, where its specialty is halibut fishing. Nix already runs the 32-foot F/V Crazy Ray and 30-foot F/V #ICrazy II, but that’s not enough to keep up with business. The last three to four years he turned away so many anglers, he decided it was time to add a third boat.

And if he was going to do that, it might as well be his dream boat. He worked closely with ACI Boats in the design and building of the Strait Crazy.

Beyond the aesthetic look of the aluminum-hulled boat, Nix chose the material and design because of the harsh conditions in Alaska. Fiberglass hulls tend to get beat up at a faster rate, while the aluminum is more wash and wear.

Secondly, Nix wanted space for people to sleep on the boat. Strait Crazy has room for five below deck. The raised pilot house and V-berth design allows for another two in the main cockpit. The captain is able to sleep in the pilot house.

Nix also built in a heating element in the bathroom that not only keeps charter passengers warm, but gives everyone a place to dry out clothes. The FLIR thermal imaging system will allow the boat to travel during the night when he shuttles hunting clients to the next destination so they’ll be there by morning.

Nix had a great measuring stick when it came time to select the Strait Crazy’s propulsion system. He’s friends with the operators of Puffin Fishing Charters, which operates Strait Crazy’s sister ship, the F/V Sorceress. Nix spent a lot of time talking to the Puffin owners about their experience with the Volvo Penta system.

“The guys have been running the drives for four years and it’s been reliable,” he said. 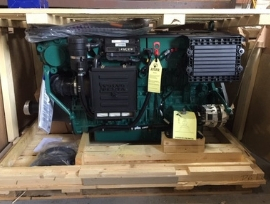 The 500-hour maintenance time for the drives was longer than other options. Nix opted to purchase two additional drives so that he’d always have a spare on hand.

“With the remoteness of where we work this gives us the ability to do the required maintenance and rotate the drives through,” Nix said.

Along with the drive performance, Nix was impressed with the five-year warranty on the engines.

He anticipates eventually adding drive temp sensors so he can monitor the temperatures during the transit to the fishing grounds, which typically takes three hours. Volvo Penta recommends coming off step every hour to cool the engines. The sensors will allow Nix to maintain the proper temperature as he gets his guests to their destination.

The Strait Crazy is scheduled to arrive in Whittier in May, in time for the opening of fishing season.

“I’m pretty stoked about getting it up here and putting it to work,” Nix said.