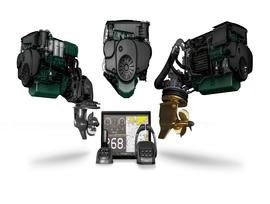 Volvo Penta has taken the old adage “if it’s not broken, don’t fix it” and thrown it out the window with the introduction of the new D4 and D6 propulsion systems. The completely redeveloped packages offer our customers increased performance and reliability with a lower cost of ownership.

The new systems have already caught the industry’s eye. Journalists from Boat Writers International awarded Volvo Penta its IBEX innovation, recognition of the work that went into redesigning the two engine lines.

The bar was already high for Volvo Penta went it set out to redesign the D4 and D6 engines. The company used its more than 100 years of marine experience and knowledge to introduce both engine lines in 2003. These weren’t engines repurposed for marine use, but specifically designed and built for the market.

It might have been easier for Volvo Penta to just upgrade the engines, but it chose to enhance the entire propulsion system. The result is packages that are available for IPS, Diesel Inboard and Aquamatic sterndrive.

The IPS pod has been upgraded and there is a new DPI Aquamatic sterndrive that increases comfort and maneuverability. Service capabilities have been enhanced and overall boat operation has been improved with the upgraded Electronic Vessel Control system.

Beyond increased horsepower, the new systems provide an improved boating experience by reducing noise and vibrations while making maneuverability at low speeds easier.

The DPI Aquamatic offers silent shift and lets the operator engage the Dynamic Positioning System with a single push of a button.

but at the same time the new engines provide greater power, the lower it’s going to cost owners to operate their boats. That’s because Volvo Penta’s engineers were able to increase efficiencies in the engines and reduce maintenance needs. Those improvements are going to translate to lower fuel and maintenance costs.

Our marine team has decades of experience in helping design the ideal Volvo Pent propulsion system for our customers. We’re confident this new line of D4 and D6 engines will surprise even longtime users of Volvo Penta products.