Nearly a year ago, Jay Zidell, President of Zidell Marine Corporation (ZMC), announced that their family-owned company would cease work at its SW Portland shipyard after the launch of its last ship, a tank barge under construction for Harley Marine.

Pacific Power Group has had a long-time relationship with Zidell, most recently providing the Volvo Penta power systems for their Harley Marine barges. Zidell has operated a marine business on their current site under the Ross Island Bridge in downtown Portland, Oregon since 1946, when they began dismantling World War II surplus naval vessels. More than 300 ships were recycled before Zidell turned to barge building and became one of the west coast’s leader in that field. 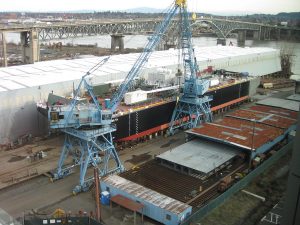 The last launch was the 238th from the Portland site, plus 39 built in Tacoma from 1960 – 76, for a total of 277. Hence the name chosen by Harley Franco, Chairman and CEO of Harley Marine, for the shipyard’s final vessel: Zidell Marine 277.

The 33 acres of Zidell riverfront property, currently the largest undeveloped site in the city, has become increasingly surrounded by development, including the pedestrian and transit Tillicum Crossing bridge. “The accelerating pace of transformation in the South Waterfront took us a little by surprise,” Zidell remarked in early 2016. He rejected offers far longer than many had expected, but the decision to close the shipyard was virtually inevitable. The closure marks the end of a century of shipbuilding and manufacturing in the area of the west bank of the Willamette River upstream of the city center.

Over their 30 years as a ship recycling firm, Zidell dismantled about 340 vessels, from patrol boats to aircraft carriers, at some points holding well-attended military surplus sales at their yard on weekends. In 1962, their business shifted as their main source of decommissioned vessels, the Astoria Reserve Naval Base, started closing its operations. The same year, Zidell commissioned its first small deck barge, the ZB-1, constructed using recycled steel plate from vehicles they deconstructed over the years. 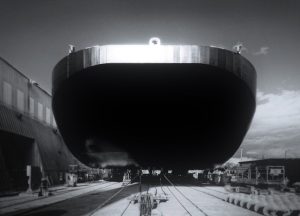 ZMC was one of the first to demonstrate the potential of bigger barges like today’s 400 footers, which they did by stripping six Liberty class ships down to the main deck and rolling a war-surplus crane on board. These 440-foot crane-barges were used successfully at the local waterfront for many years to transport heavy equipment and unload ships at docks without the necessary facilities.

The Exxon Valdez oil spill of 1989 ushered in Zidell’s next big ship construction boom. The Oil Pollution Act of 1990 required new tank-barges to be built with double hulls to help avoid future spills. Additionally, the Bonneville Power Administration opened its new, larger lock at Bonneville Dam in 1993, which convinced Tidewater Barge Lines of Vancouver to build a new class of tank barges to fit the BPA’s new lock size, culminating in the first order for an OPA 90 barge.

Zidell modified their launch ramp to accommodate the additional beam and handle the extra weight of the double hull. The first OPA 90 tank barge was designed by Elliot Bay Design Group and was 328 feet long, with a 76-foot beam and 22-foot depth of hull and capacity of 69,000 barrels.

Since that time, the shipyard has built 20 additional tank barges using seven different designs. “They are far more complex and all took a year or more to complete,” explained Bill Gobel, VP and COO of ZMC. Zidell’s last barge is one of the largest at 421 feet by 76 feet by 27 feet deep, weighing in at 3,400 tons with a capacity of 80,000 barrels. The specifications for this vessel include cargo pump engines and inert gas generators powered by two Volvo Penta radiator-cooled auxiliary engines. 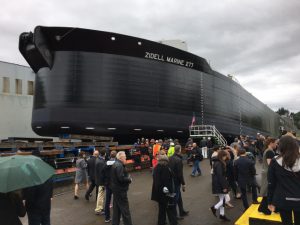 At a ceremonial launch on June 16, Harley Marine took delivery of the Zidell Marine 277, which was approximately the 25th barge over the last 30 years. “This is the end of one chapter, and the beginning of another,” Jay Zidell announced. ZMC will still be involved in marine transportation through West Coast Barge, an affiliate company, which charters the dozen barges built and owned by the family. After a joint cleanup effort with Oregon’s Department of Environmental Quality, they have begun the process of rebuilding an urban waterfront by planting more than 15,000 native plants, and helping production crew transition into other local shipyards or related fields.