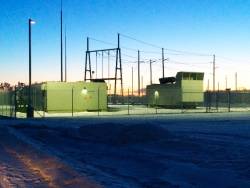 Rather than upgrade the out-of-date coal-fired power plant, Clear Air Force Station decided to connect to the Alaskan transmission network and add a grid-powered heat plant and backup power. Cost avoidance from modernization for the complete project will save the Air Force approximately $2.6 million in fiscal 2016 and $1.9 million each year after.

Pacific was selected for the project due to previous success working with the station and Pacific’s expertise with on-site power generation in Alaska’s extreme weather and remote conditions.

“In the event of an emergency or power outage, the power generation system our team supplied will keep Clear Air Force Station operating smoothly and allow our service men and women to continue their critical mission,” said Travis Coffey, Pacific Power Group Power Generation director. “The dependable MTU generator sets are vital to the functioning of the base.”

Delivery of the genset took place in summer 2015 and additional equipment was supplied over the next several months.

Read more about the project on Power Engineering.