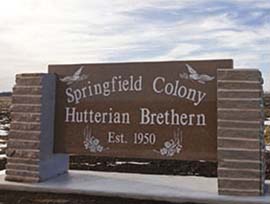 In a remote area, power issues are critical. Often, weather or aging systems cause outages, in which case, having reliable backup power can be key to reducing loss and maintaining productivity. One of the verticals in which Pacific Power Group has extensively worked is rural communities and infrastructure, and this case study from our partner MTU Onsite Energy is a perfect example of a key deployment of backup power.

Springfield Colony is a Hutterite farming community outside Manitoba, Canada. Named after preacher Jacob Hutter, the Hutterites, who found their way from Europe to the United States and eventually Canada, live today in a biblically rooted communal lifestyle in small colonies throughout the prairies. Although they primarily support themselves with agriculture, they supplement their income with successful manufacturing activities.

Standby Power is important because, although their primary electricity is provided by the local utility companies, their colony has frequent power outages. Without a backup generator, they could lose millions of dollars—in livestock due to lack of ventilation, loss of productivity, and other critical infrastructure.

Previous to choosing their new generator, their old 400 kW standby system forced them to choose which buildings and services to keep running during an outage. After considering a number of possible replacements, their selection of the new Series 2000 generator from MTU Onsite Energy provides them with a rated capacity of 750 kW, more than enough to keep electricity flowing to all the colony’s equipment and homes when the main electricity fails, in a unique setup that also significantly saves them on power requirements. View the MTU case study for more about the Springfield Colony backup generator deployment.

Pacific Power Group’s power generation team is an experienced emergency power generation system provider for many of rural areas and critical facilities in Oregon, Washington, Alaska and Hawaii. Whether your facility requires a new backup power system, a custom engineered package or a proactive preventative maintenance plan for any major generator brand, our team can work closely with you to provide a solution.